Writer Steve Houk had the unique opportunity to sit down with legendary rock icon David Crosby recently, to discuss his storied career, his ongoing solo tour, and his relationship with the Grateful Dead. Here’s what Crosby had to say:

When you ask David Crosby what he thinks separates the music that he’s done solo, or with those three other guys named S, N & Y, from the rest of the pack, it’s a no-brainer.

“It’s the songs, man. Everything is the songs,” an animated and engaging Crosby told me from his home in California as he prepares for his summer solo tour. “That’s what really separates the men from the boys. You can take a mediocre song and do all the production you want on it, and you’re still just polishing an ‘excrescence.’ There’s a polite word. But look, I think that we’re good writers. In whichever combination, either three good writers or four good writers, it gives us a very wide pallet of colors to work from. And I think that’s why the couch album and ‘Deja Vu’ were so strong. There’s a very wide scope of material there that one person couldn’t have written. I think that gave us a huge advantage.”

As Crosby, 73, traverses through his 52nd year of creating music — still immersed in a career that has seen him enter the Rock and Roll Hall of Fame twice, for his work with The Byrds and CSN — right now, his gift is in full bloom. Coming off his critically acclaimed solo release Croz in 2014, his senses are sharp, and his seasoned instincts appear keen. His songwriting spark is in the now, not just the then, the songs are coming fast and furious, and a lesser man might not know what to do with such a rush. But David Crosby does. If anyone knows how to handle a rush, it’s Croz. Take it and go with it.

“I’ve always written in kind of bursts of activity over the years,” Crosby said with a twinkle in his voice. “I’ll write two, three things in a row and then a couple of months will pass by before I write another thing. I don’t know why that is, but I’ve been in now the longest most sustained burst of writing that I can remember in probably thirty years. I’m just amazed it’s going this long. I wrote two things this week. So I don’t know what to think. I feel very grateful, I don’t really understand it, but I guess I don’t have to understand it, I just have to work with it. I was stunned by the amount of material that’s coming my way and very grateful. And I’m smart enough to pay attention to it so that’s what I’ve been doing. I pick up the guitar every day several times, and try to work at it and it’s been working.” 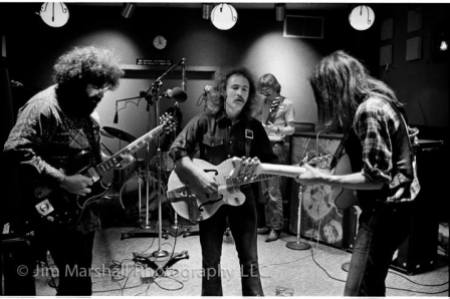 (L-R) Jerry Garcia, David Crosby, Phil Lesh and Neil Young during recording of Crosby’s 1971 album If I Could Only Remember My Name (photo courtesy Jim Marshall)

Although Crosby has been prolific in his songwriting, he has only released four true solo records, beginning with the stellar, star-studded If I Could Only Remember My Name in 1971. That record came at a devastating period in his life, when writing songs was the only thing that kept him going when nothing else could.

“That was a life saver, that record man, absolutely a life saver,” Crosby said with a clear remembrance. “I was going through a really rough period in my life there, my girlfriend had just gotten killed in a car wreck. I had no way to deal with it at all. I was in pretty bad emotional shape when we finished ‘Deja Vu’ and the only place I really felt comfortable was in the studio. So I just stayed in there. And that’s the record that happened. Jerry Garcia was a good friend of mine and came almost every night, some of the other guys, Phil Lesh, and Paul Kantner and Grace Slick and people from Santana and the Dead and the Airplane and other bands up there would come by. And sometimes Nash and Joni Mitchell. It was a rough time but that’s how I stayed alive, making that record.”

Forty-four years after that album was released, and as the Dead celebrate their 50th anniversary this year, Crosby recalls his relationship with the Grateful Dead band members with much fondness, relationships that continue even today.

“I was friends with all of them, and I’m still friends with Phil, we are buddies and have been for a long time and I’m sure we will be for a long time. I love ’em, they are a bunch of great guys, we would jam alot and spend time at Bob Weir’s place in Mill Valley which is right near my place and I would go over there when they were rehearsing, and just interfere and get in the way and pester them. Start jams right when they were trying to learn new tunes and stuff.”

Crosby will be back out there with his longtime mates this fall for a CSN European swing — “Why do we do it? I guess we love it, that’s the answer” — but for now, it’s just him and his guitar, naked out there. And that’s just how he wants it to be right now.

“It’s more challenging, it’s how I started out,” Crosby said. “One guy, one guitar. But it’s also a way that I can do one of the things I love the most, which is tell you the story of the song. The words really count, and if it’s just you and the guitar, you get to really actually make the words count. And they’re a big deal for me, poetry’s a big deal for me. A BIG deal to me. I love doing it this way, it’s much more challenging, and at this point in my life, challenging myself is a very healthy thing to do.”

And as always, when it comes right down to it, it’s all about…the songs.

“To carry it yourself, it has alot more to do with the song. If you got a whole band there, you can play something that’s only moderately good and get away with it. If it’s just you and the guitar, it has to be a really good song. That for me is crucial stuff. I really like that. I do have some good songs. It’s a different ball game than playing with the band, completely. Not everybody wants to do it and not everybody can do it. I do really love doing it.”

And will Crosby be pulling out any buried treasures from his legendary canon, any big surprises, on this short solo soiree?

“Oh definitely, but I’m not gonna tell ya,” he says, laughing. “You have to come to the show, man. I hope you do come, I think you’ll like it. If you like songs, you’ll love it.”

This piece originally ran in the Midlife Rocker blog.